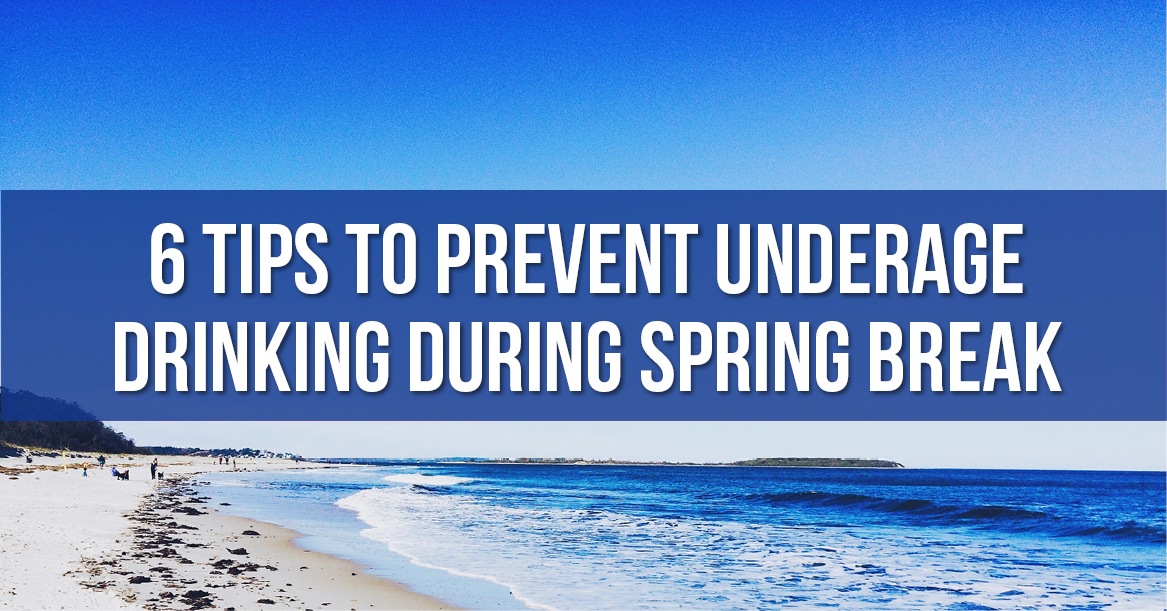 Posted at 19:46h in Uncategorized by nextstepadmin

Spring break is a time for teens to experience freedom from school and spend time with friends and family. However, extra free time and lenient rules can also increase underage drinking, specifically binge drinking, and other risky behaviors.

According to the Office of National Drug Control Policy, one in seven high school students under the age of 18 take unsupervised trips during Spring Break. Studies show that students who vacation with friends during spring break dramatically increase their alcohol use.

These teens are not the only ones at risk though. Teens who stay home unsupervised by parents who still have to work, or have more lenient rules even when they are home, are at an increased risk of experimenting with risky behaviors.

It is our job as parents and other caring adults to understand the importance of keeping our teens safe during a week when they are at a high risk to experiment with alcohol and engage in other risky behaviors.

Here are 6 tips to prevent underage drinking during spring break:

1. Don’t let your teen go on an unsupervised trip

Unsupervised teens are at a much higher risk of binge drinking. One of the greatest dangers of binge drinking is alcohol poisoning- this causes basic life-support functions to shut down and can lead to death if not properly treated.

The best way to protect our teens from the potentially deadly consequences of spring break binge drinking is to avoid unsupervised trips. The part of the brain that says “Wait, stop! This is a bad idea.” isn’t fully developed until the mid-twenties, so even with the best intentions, many teens can still fall into unhealthy behaviors.

Despite the fact that many parents think their teens don’t listen to them, parental disapproval is still the number one reason teens choose not to drink alcohol.

Talk to your teens about the dangers of underage drinking, including alcohol poisoning, violence, STIs, teen pregnancies, increased risk of physical and sexual assault and death.

If your teen goes on a trip, talk to them about using the buddy system. Three or more is recommended.

Walk through peer pressure scenarios and let your teens practice different ways to say no. It is important for them to feel confident in their answers.

5. Keep up communication and double check everything

Whether your teens are at home or on a trip, always check where they’re going, who they’re going with and that they have a fully charged phone that is always on.

Network with their friends’ parents and make sure they also have a zero-tolerance policy against underage drinking and drug use.

6. Never provide alcohol to minors and lock up alcohol in your house

This applies to everyone, not just parents. Whether you’re a parent, aunt, uncle, cousin, older sibling or family friend, never provide alcohol to minors and make sure you lock up the alcohol in your house. (Don’t forget that it’s against Texas law to make alcohol available to a person younger than 21, even if parental permission is given, according to the TABC.)

Many adults opt to host parties on their private residencies for minors because they feel like it’s a safer environment-however, the dangers of underage drinking are much more than drinking and driving. (Other reasons include impaired brain development, increased risk of addiction, increased risky sexual behaviors, alcohol poisoning, death and more.)

Business owners that serve or sell alcohol need to make sure their staff is properly trained on how to check ID’s, what to look for in a fake ID and ensuring they don’t sell alcohol to minors.

Talking to Your Kids about Substance Abuse at Every Age
How St. Patrick’s Day Became the Biggest Beer-Drinking Holiday in the US
What You Should Know About Vaping
Coalition Corner With Crystal Dykes