Posted at 20:58h in Uncategorized by nextstepadmin

When the East Texas heat reaches its peak during the summer, playing in the water is a welcome relief.  But when alcohol is involved, what should be a fun time can become dangerous.

According to the National Institute on Alcohol Abuse and Alcoholism (NIAA), 70 percent of water recreation deaths of teens and adults involve alcohol.

“Alcohol impairs judgment and increases risk-taking, a dangerous combination for swimmers,” reads the website. “Even experienced swimmers may venture out farther than they should and not be able to make it back to shore… Even around a pool, too much alcohol can have deadly consequences. Inebriated divers may collide with the diving board, or dive where the water is too shallow.”

If you have a teen, you know they can be risk takers. (Ever hear yourself say the phrase “What were you thinking?”) The reason teens are known to take risk is because the part of their brain that assesses risk — the prefrontal cortex — hasn’t finished developing. 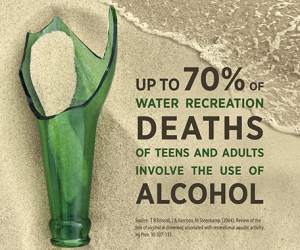 Add alcohol and water into the equation, combined with their risk-taking tendencies, and the effects can be devastating.

Alcohol may be involved in 60 percent of boating fatalities, according to NIAA, and a boat driver with a blood alcohol concentration (BAC) more than 0.1 percent is 16 times more likely to be killed than someone who hadn’t been drinking.

Alcohol is the No. 1 contributing factor in recreational boating deaths, according to the Coast Guard.

There are a lot of things to think about when operating a boat that an intoxicated brain just isn’t well-equipped to handle, the Coast Guard says on their blog.

“How deep is the water? Are there submerged dangers like rocks or trees? How big are the waves and what direction are they coming from? Waterways aren’t marked by lanes, signs and street lights the same way that roads are and most boats don’t have headlights,” the blog reads. “Operating a boat is challenging enough while sober. Adding alcohol only makes it more difficult and dangerous. Exposure to sun, wind, rain, noise, vibration and motion – ‘stressors’ common to the boating environment – intensify the side effects of alcohol, drugs, and some medications.”

According to the Texas Parks and Wildlife website, in Texas in 2013, there were 206 boating accidents, 209 cases of boating while intoxicated, 85 injuries and 22 fatalities.

“A person who either appears to be impaired and/or has a blood alcohol level of 0.08 or higher while operating a boat can be arrested for BWI,” according to Texas Parks and Wildlife website. “A person arrested for BWI may be jailed for up to 180 days, be fined as much as $2,000 or both. Additionally, the person’s drivers’ license may be automatically suspended.”

Be safe and smart this summer. Talk to your teens about the dangers of drinking, and especially drinking near the water.