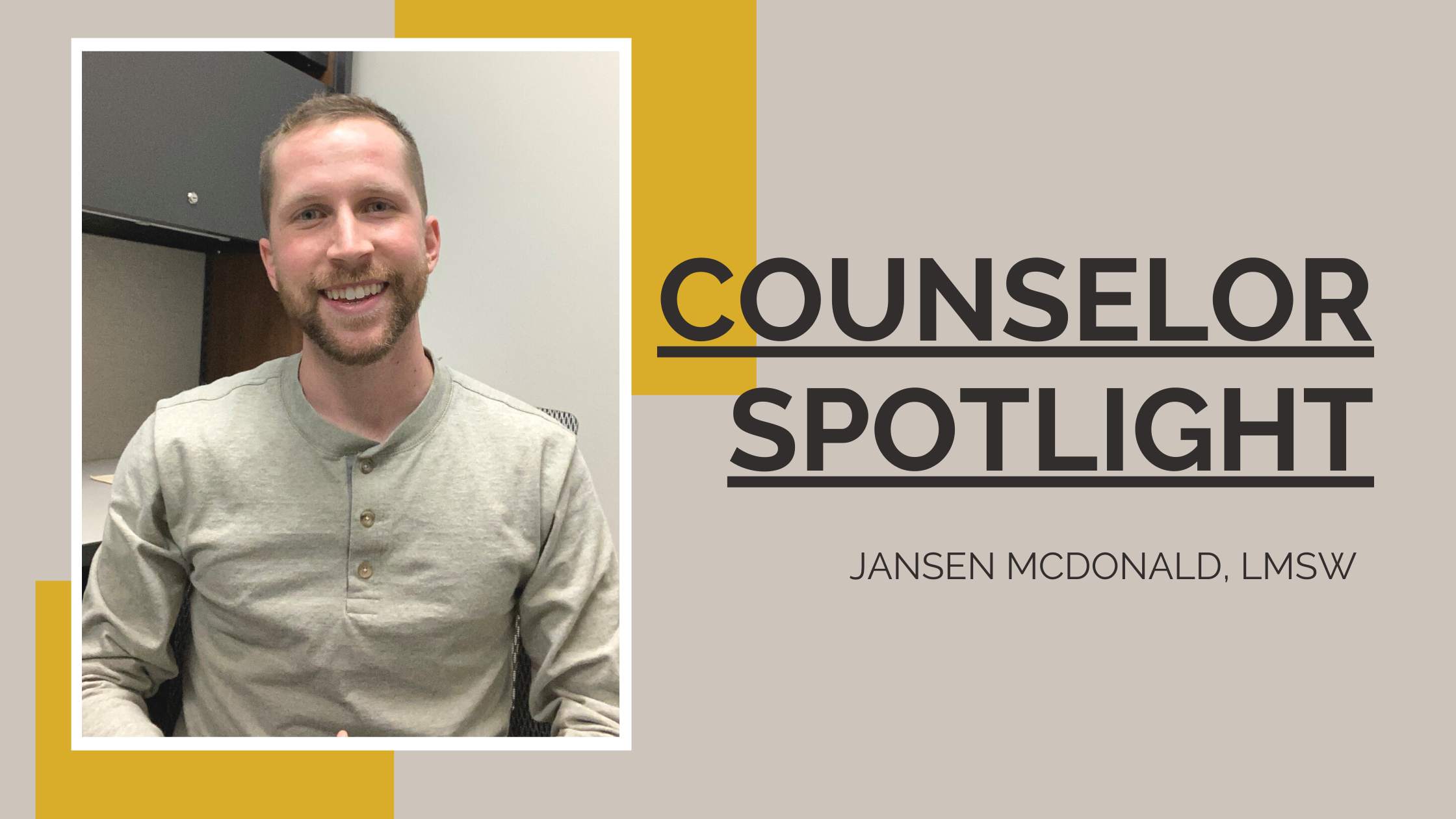 Posted at 22:46h in Blog, Counseling by nextstepadmin

Next Step counselor Jansen McDonald, LMSW, happened upon the counseling field in an unusual way.

“I majored in psychology in college just because I love to be with people, but I didn’t know what that would entail for me,” he said. “When I really found my calling was when I participated in study abroad in Uganda at an orphanage with teenage boys who had gone through extreme trauma. I worked alongside their counselors and social workers, helped those boys adjust to life and deal with emotions and behaviors. That’s when I really fell in love with it and could see myself doing that in the States.”

Jansen started with Next Step in September of 2020 and sees students at a Midlothian high school, two Midlothian middle schools, and Waxahachie High School. Jansen is one of 18 counselors Next Step employs to offer free behavioral health counseling on 59 school campuses and 12 juvenile probation offices. The program is funded through a combination of grant funds and school budget allocation.

“I really love Next Step; I love the model,” Jansen said. “It seems like their entire motive is ‘How can we remove as many barriers as possible to get people what they need?’ When it comes to mental health, there are hundreds of factors that get people from getting the help that they need, especially when it comes to teens. There’s the stigma, the cost, even just the time. So what I really, really love about Next Step is they say ‘What are these barriers and how can we take them away? How can we make this easily accessible to every student, regardless of their economic status, where they live, their academic level?’ I love that.”

While Jansen has many stories of students who have benefited from the program, he recalled one in particular. He saw one student who was having issues in his relationship with his father.

“Over the last year they grew apart and he feels like they don’t talk anymore,” Jansen said. “It’s really hurt him, the feeling of a lack of attention and affection. We’ve been processing through that: What is it that he’s craving? We talked about how it’s important to address the things that make us anxious, and how that’s the only way change happens.”

Over a six-week span, Jansen helped the student find the courage to talk to his father about how he was feeling.

“It went so well,” Jansen said with a smile. “His dad was receptive and felt the same way, but he didn’t know how to talk about it either, so he was glad his son brought it up. I’m excited to see him have his relationship with his dad he’s been craving.”

Jansen said helping male students talk about their emotions, something that can be stigmatized for boys and men, is something he has found most rewarding.

“I enjoy helping adolescent boys develop a framework for talking about their emotions, and it doesn’t have to be a really emasculating way, but a way that is healthy and shows them how to deal with their problems,” he said. “Getting to introduce that to them is so important because that will set them up for healthy communication, healthy relationships for the rest of their lives.”

Jansen said the students he’s seen in the time he’s been with Next Step have had a wide variety of struggles.

“I see a lot of different things, that’s one thing that surprised me,” he said. “No. 1 is anxiety. I also have a lot of kids dealing with death in their family, a lot of parental death. I help them through what that means for them and how to grieve well. Those are big ones. There’s also a lot of self-harm and suicidal ideation. There’s a lot of different factors, and every one is unique in what they struggle with.”

According to the National Alliance on Mental Health, “1 in 6 U.S. youth aged 6-17 experience a mental health disorder each year, 50% of all lifetime mental illness begins by age 14, and 75% by age 24. Suicide is the 2nd leading cause of death among people aged 10-34”

Jansen said one of the things he likes about working with adolescents is the impact he can make at this particular time in their lives.

“Adolescents are at a really important age,” he said. “They are still settling into their foundation that is going to set them up for the rest of their life. Things are a little firmer than they are with children. They have some coping skills, some communication skills, so you can really touch on some hard and challenging things enough that they get it, but they are still moldable enough that you really have the opportunity to impact the way they think. Nothing’s quite set in stone yet, so we can set up a foundation that is going to serve them for the rest of their life. Those teenage years are really pivotal for everybody.”

Jansen added that anyone can benefit from mental health counseling.

“The No. 1 thing I want people to know is that mental health is something we all deal with,” he said. “It’s part of everyone. We all have things we struggle with, hard things we go through. The same way I encourage people to take care of their physical health, why wouldn’t I encourage you to take care of your mental health? It’s just as much a part of you as your muscles or your diet or the physical aspects of life. The stigma often comes because it’s not always visible, it’s not always clearly seen as other health issues. Just as much as I would want someone in peak physical health, I want anyone in peak mental health … Oftentimes people think counseling is only needed when there’s a crisis or severe mental illness, but we all have ups and downs in life. We all have moments when we just need to talk about what’s going on. I know some people who see a counselor because they just feel like they need someone to talk to about their thoughts. I feel like we all experience that at certain times … In the same way you feel really good after a good workout, you can feel really good after a counseling session and think “I really needed that.’ It gives you clarity and perspective, and I don’t think people realize that’s what counseling is.”