Posted at 17:22h in Uncategorized by nextstepadmin

E-cigarette companies were just spreading their wings a decade ago but have recently grown at a furious pace. According to the BBC, the global market for vaping has increased 280% from 2014 to 2019. This rapid growth has left US lawmakers and regulators lagging behind in their mission to protect their citizens. Still, enough research and investigative digging has been done to uncover several alarming facts that should give all Americans cause for concern. Here are five dirty secrets vape companies don’t want you to know.

1. E-Cigs are NOT designed to help you STOP smoking.

You’ve probably heard the ads for JUUL, one of the largest e-cig manufacturers in the world, claiming that its product helps smokers quit smoking. What you haven’t heard is the proof for this claim. During JUUL’s congressional hearing in July of 2019, Senator Dick Durbin stated that “Despite all the marketing claims and all the paid testimonials, there is no credible medical evidence of JUUL’s most fundamental marketing claim… that JUUL devices help adults quit smoking cigarettes.” Not only that, but here’s a video of JUUL Co-founder and Chief Product Officer James Monsees claiming that “JUUL is specifically, and on-purpose, not a cessation product.”(See 5:40 in video) 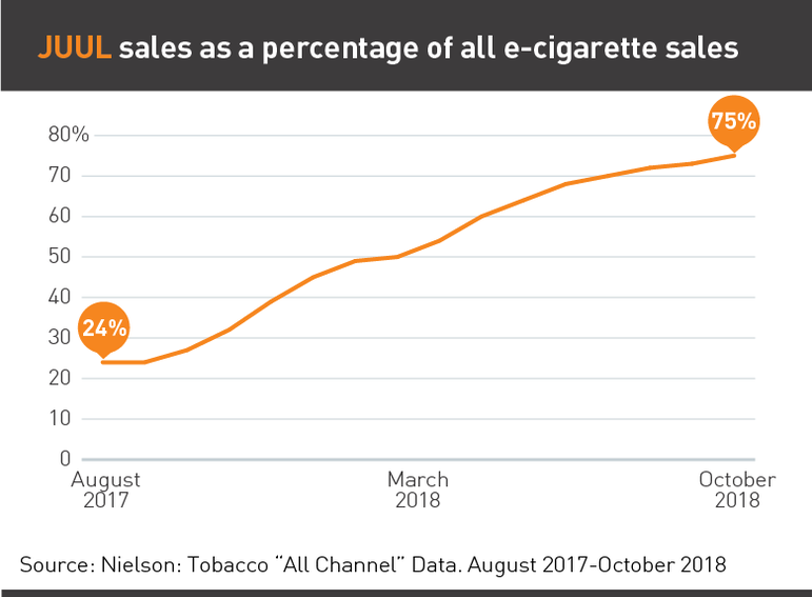 2. E-Cigs DO help you START smoking.

Not only is there no evidence that e-cigs help smokers quit, but there is evidence that they help non-smokers start. According to a study by the University of Pittsburgh Schools of the Health Sciences, young people who use e-cigarettes are four times more likely to go on to smoke combustible cigarettes. Perhaps that’s why Altria, the parent company of Philip Morris who produces Marlboro cigarettes, recently purchased a 35% stake in JUUL.

3. E-Cigs have been marketed towards TEENS.

It’s no secret that a large part of JUUL’s early surge in sales came from young buyers. Ads like the one seen below use vibrant colors and young attractive models to allure teens to their product. Evidence in the 2019 hearing revealed that JUUL had a contract with a marketing group designed to find hundreds of social media influencers to help sell their product to young viewers. On top of that, at their peak, e-cigs had over 15,000 flavors to choose from with youthful names like O.M.G (Orange Mango Guava), Blue Razz Lemonade, and Frozen Lime Drop. Fortunately, a recent flavor ban went into effect in February of this year, making it illegal to sell flavors in pre-filled pod devices other than menthol and tobacco. 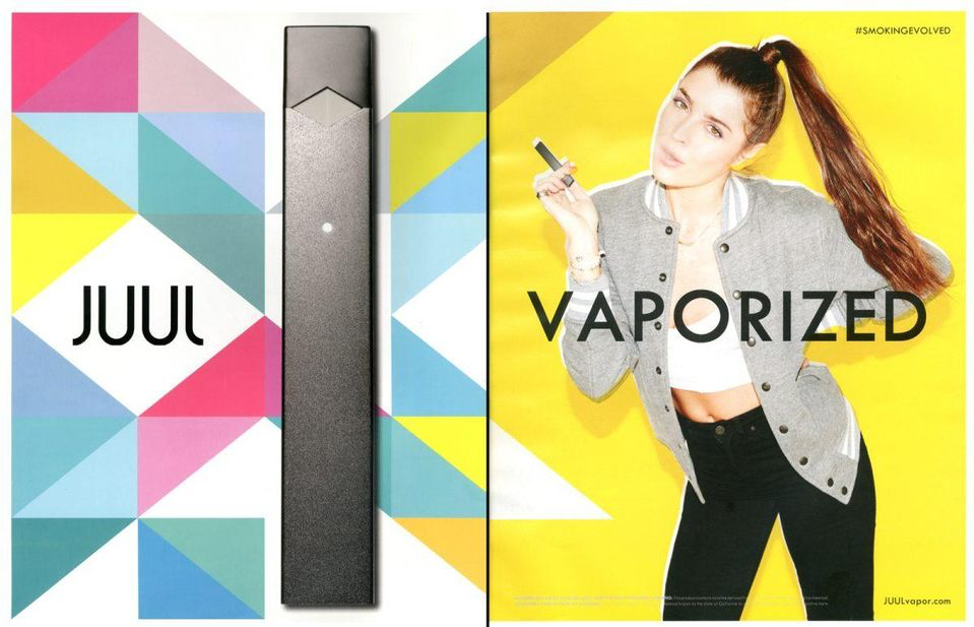 4. E-Cigarette use is a youth EPIDEMIC.

No, that’s not an exaggeration. The surgeon general issued an advisory in December of 2018 declaring the youth vaping trend an epidemic. Unfortunately, this uptick in vaping isn’t just experimental and occasional use – it’s regular use likely driven by addiction. The most recent National Youth Tobacco Survey reveals that 34.2% of current high school e-cigarette users use them 20 days or more per month.

5. E-cigarettes do NOT produce water vapor.

One of the biggest myths concerning vaping is that it’s safe because it only produces water vapor. This simply isn’t true, as what’s being inhaled from the e-cig is not water vapor, but an aerosol. These aerosols can contain cancer-causing toxins like formaldehyde and benzene. They also contain metals and other chemicals like cadmium, lead, and toluene. But perhaps the most damaging chemical in e-cigs is nicotine. Scientists have found that nicotine is as addictive as heroin, cocaine, or amphetamines. It changes brain chemistry, leads to memory and concentration problems, and can make youth who use it more susceptible to addiction to other substances. Unfortunately, most teens are unaware of what they’re putting into their bodies. According to the National Institute on Drug Abuse, 66% of teens say that their e-cig contains “just flavoring,” while only 13.2% acknowledge that their device contains nicotine. 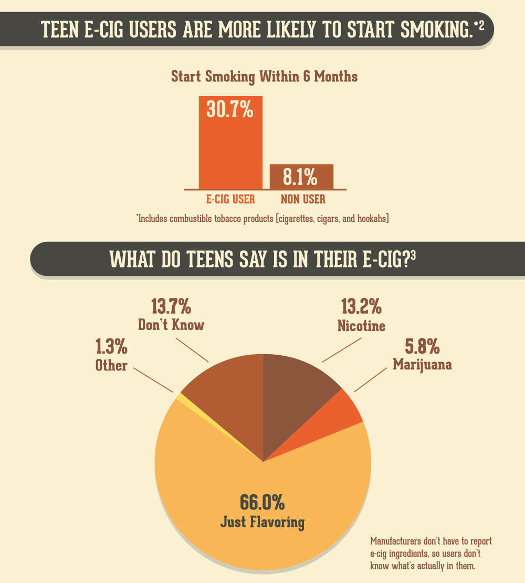 The good news is that lawmakers and regulators are starting to catch on. Recently a bill was signed into law that limits the age of tobacco purchasing to 21 or older. We’ve already mentioned the flavor ban designed to prevent e-cig companies from attracting teen buyers. The bad news is that these measures aren’t enough, with some experts predicting up to 22.5% growth in the e-cig industry over the next five years. If we are to curb the youth vape epidemic, these five dirty secrets and others need to be shared to expose e-cigarettes for what they are: a major threat to our nations’ youth.