26 Feb From Criminal to Clinical | Part 1, Mission Failure: Why the War on Drugs Needs a New Strategy

Posted at 17:38h in Uncategorized by nextstepadmin

I was 7 years old when Toy Story hit theaters. Although I was old enough to know better, the portrayal of walking, talking toys reinvigorated my imagination. I soon found myself speaking to my toys and keeping them on clean, open shelves (rather than locked in a dark toy-box). My hope was that my acts of generosity would put me in my toys’ good graces, and maybe, just maybe, they would break their code of silence and speak to me. But no matter how hard I tried to draw life out them, my toys remained silent. It seems behaviors driven by faulty reasoning, no matter how fervently and well-intentioned, will always fail to change reality.

Unfortunately, crazy ideas are not limited to 7-year-olds and their attempts to talk to their toys. The way our nation deals with its drug crisis might be just as absurd. For decades the stigma surrounding addiction has been that those who abuse alcohol and other drugs are selfish, undisciplined threats to society who must be stopped. Richard Nixon’s “War On Drugs” spotlighted and reinforced the long-held, racially-motivated beliefs that began in the 1930s with the works of Harry Anslinger and others, namely that drug-users were criminals who needed their behavior punished out of them. Armed with this belief, policymakers passed harsher sentencing laws and increased enforcement actions, especially for low-level drug offenses.

While many question the efficacy and motivation behind these crack-downs, no one questions the fervor in which they’ve been carried out. Every 25 seconds, someone in America is arrested for drug possession. More than half of America’s federal prison inmates today are in on drug convictions. While the overall population in America grew by 51% from 1974 to 2014, America’s prison population grew by 600% in the same time-frame. 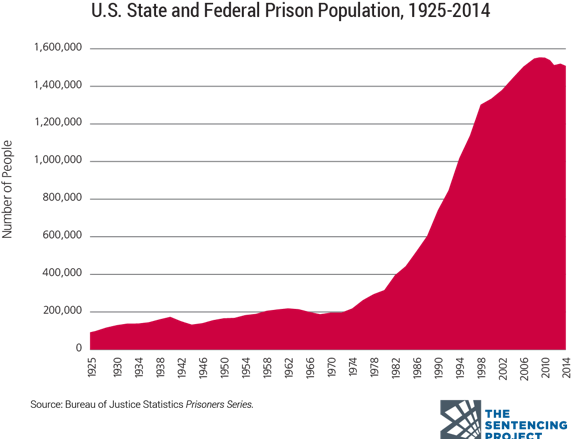 All of these efforts have cost us more than an estimated $1 trillion. Unfortunately, the return on investment hasn’t been good. The US addiction rate has held steady since the 70s at about 1.3%, while spending has increased by more than 1,000%. In his book “Clean”, David Sheff cites that in 2010, 85% of the US prison population was incarcerated for crimes committed related to alcohol, either by committing a crime while under the influence, committing a crime to get money to buy drugs, or by violating some alcohol or drug law. While we currently spend $400 billion a year on drug abuse problems, American teenagers use drugs at a higher rate than teens in any other country in the world. 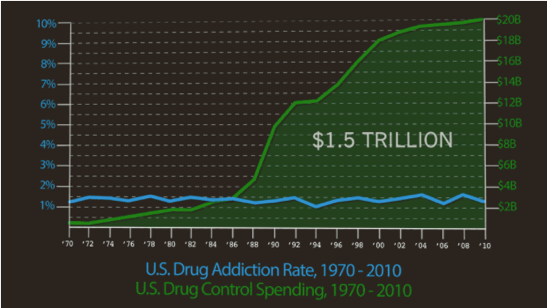 In short, the War on Drugs has been an abysmal failure. The trillions of dollars and millions of drug-users placed behind bars have done nothing to change our national addiction rate. If Einstein was right, then the way we handle addiction is insane: we continue to do the same things over and over again while expecting different results. The plastic toys still aren’t talking.

The good news is that there is hope for the drug crisis facing our nation. Research into the causes of addiction has yieled a massive revolution in the way we think about substance abuse. Check out part two of our blog post to learn more about a new approach to addiction and the promise it holds for the millions of people who suffer from it.